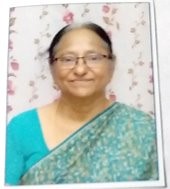 Mrs Bharathy Jacob, former Dean of the College of Nursing in Christian Medical College was born into a Nambudripad family in Kerala. She spent her early years in Kerala and then moved to Vellore along with her family where her late father was studying for the MCh degree in Neurosurgery. Her father had become a Christian earlier while he was training in Scotland. After her father, Bharathy was the first person in the family to become a follower of the Lord Jesus. Her early education was in Vellore and then the family moved to Ludhiana where her father joined the Christian Medical College there. She completed her schooling in Mussouri where she was a bright student and sportsperson. After completing the ‘O’ levels and pre-university degrees and after much thought and prayer, she decided to join nursing. In 1968, she joined the Rajkumari Amrit Kaur College of Nursing, New Delhi for the B.Sc. nursing course. She excelled in her studies there and was the best outgoing student for B.Sc. (Honours) Nursing. She was awarded the President’s Silver Medal for standing first in B.Sc. Nursing in Delhi University.

She started her nursing career as a clinical instructor in RAK College of Nursing. Her interest in mission work took her to the Christian Hospital, Chhatarpur, where she worked for a year. She then joined for the M.Sc. Nursing course in Paediatric Nursing in CMC. In 1988, she joined the College as Lecturer and retired as Professor in Paediatric Nursing and Dean of the College. After retirement, she moved with her husband to Dimapur, Nagaland, where they joined the Christian Institute of Health Sciences and Research, which was an institution started jointly by CMC, EHA and the Government of Nagaland. The state of Nagaland did not have a college of nursing and with the help of the administration, the first college of nursing was started. With the cooperation of the young faculty there, they had three programs; the GNM course, the PCBSC and later the basic BSc course. After about seven years, she was able to hand over to her successor and return to Vellore. But in a short time, she was urgently called to help start the College of Nursing in Christian Fellowship Hospital, Oddanchatram. Having completed this task, she spends her time in cooking and managing the home, and in writing a book about her late father.